Until recently, hearing aids have been large, clunky devices that moderately amplified sound and often made the wear look absurd. Before electricity was discovered, ear trumpets were used by those hard of hearing in the 19th century.

True to their name, ear trumpets were large bell-shaped objects placed in the ear and used to amplify sound.

It wasn’t until the middle of the 20th century that hearing aids were developed to sit entirely on or in the ear.

These days, hearing aids are smaller and sleeker than ever. Gone are the days of the giant beige earpieces that sit heavily on the ear. Today’s hearing aids are tiny devices that can reside deep inside the ear and are virtually invisible to others.

The discreet location renders it nearly invisible to outside observers. This is why you’ll often hear people refer to these hearing aids as invisible. While they’re not truly invisible, they’re much more hidden than other popular hearing aid models. Unlike other hearing aid styles, the CIC model does not have any outside pieces or tubing.

Here at Audicus, we offer a completely-in-canal hearing aid called the Aura. Its tiny design allows users to wear it without feeling self-conscious about their hearing aids. 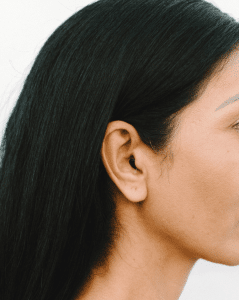 In-the-canal (ITE) hearing aids are also very small and offer cosmetic advantages. They sit in the shell of your ear, the bowl-shaped part of your ear that you can see.

Some ITE aids fill the entire shell, while others fill only the lower half. While these devices are not quite as hidden as CIC hearing aids, the ITE models are also very small and hard to see.

The Future of Tiny Hearing Aids

After so much development in the last hundred years, what can we expect the future of hearing aids to hold? Hearing aids and other wearable tech are getting smaller and more advanced each year.

If you’re impressed by the micro design of hearing aids today, you’ll probably be excited to hear what the hearing industry has in the works for you. Hearing aid models and styles continue to advance with technology.

Perhaps in the future, we may even have a truly invisible hearing aid that can’t be seen by human eyes!

Scientists are working to develop hearing aids that are fully implanted in a wearer’s ear and use the body’s own energy to stay continually charged.

Another technology that is in the clinical trial stage is the ear-lens, a device that is mounted on the eardrum and uses laser signals to amplify and clarify sound.

While hearing aids have long been obtrusive devices, those who suffer from hearing loss can now look forward to incredible technologies that have made hearing aids smaller and more efficient than ever.

By: Elena McPhillips, Updated in 2022 by Kim Smith