It’s no secret that some professions have more exposure to loud noises than others. Take construction or factory workers, for example. There are many things an employee and their employer can do to minimize the risk of permanent hearing loss, but what happens when your employer discriminates against you based on your hearing loss? This was the question that Dan Carione had to answer after a more than 20-year career with the NYPD turned sour.

Dan Carione (pictured above) was a deputy inspector with the New York Police Department, and began his career without any hearing-related issues. Then, in 1996, he was involved in an incident in which a fellow officer fired five gunshots less than two feet from Carione’s ear. Carione maintained that the shots fired that night, so close to his ear, were the cause of his hearing loss. However, he was able to wait another decade before he bought a hearing aid—he had been moved to a new division in Queens, and his new location was right next to elevated subway tracks, which exacerbated his hearing loss.

The NYPD initially agreed with his request for a hearing aid, sending him to an audiologist and even paying for the device. However, just a few shorts months after receiving his hearing aid (and thus restoring hearing in his right ear), a doctor warned him that the device could spell disaster for his career. Soon after, he learned that the police pension fund’s medical board was forcing him into disability retirement due to his hearing loss, insisting that requiring a hearing aid impairs the officer from fully performing while on the job. Carione was only 43 at the time.

Although Carione would receive a pension as a retired officer, he had no wish to retire and deeply wanted to continue serving the NYPD and doing what he loved. After many years of informally allowing officers to wear their hearing aids, the department inexplicably began enforcing the ban on hearing devices. Carione was not the onlyofficer forced into retirement, and younger officers were required to stop wearing their hearing aids towork. Carione, and another officer named Jim Phillips, decided to take a stand (pictured with their legal team). 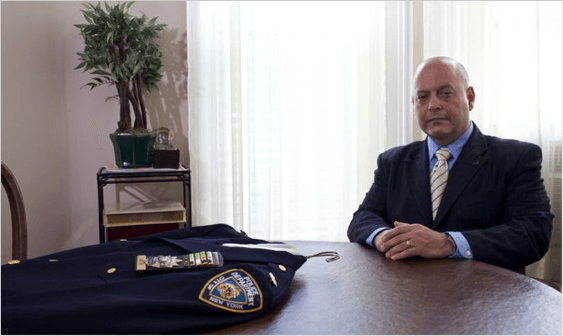 With the help of the Disability Rights Advocates and the Hearing Loss Association of America, Carione and Phillips took their case to court to challenge the NYPD’s discriminatory policy, and filed a complaint with the federal Equal Employment Opportunity Commission in 2009. Carione, along with many other officers over the years, suffered hearing loss due to on-the-job hazards—and it did not seem right that he and the others should be punished. Carione stated that the hearing aid ban would just discourage officers to hide their hearing loss, rather than seek help to treat it.

After five long years, Carione and Phillips finally saw their case reach the courtroom, in March 2015. Right before the case went to trial, the officers and the NYPD settled the case. The police department offered both Carione and Phillips their jobs back, hearing aids included. Phillips chose not to return to the NYPD because he had found other employment with a bureau that allows hearing aids (the NYPD is one of the few that bans hearing aids). Carione was thrilled to be back on the force, and to have carved an important path for all NYPD officers with hearing loss.

The Future of Hearing Loss in the NYPD

It’s important that the hearing loss community has advocates like Dan Carione and his team, who are not afraid to stand up for equal treatment in the workplace and beyond. Those with hearing loss and those without need to support each other, in order to gain equality in everyday life. If you or someone you know feels they are being treated unfairly due to hearing loss, do some  research on the U.S. Equal Employment Opportunity Commission and reach out to them. Be inspired by Dan Carione’s fearlessness, and take a stand!