Where is the loudest place in America? West coast? East coast? Las Vegas? Thanks to a new map produced by the National Park Service, we can pinpoint the noisiest (and quietest) places in the country. The map was presented an the annual meeting of the American Association for the Advancement of Science this year, and is the result of 1.5 million hours of acoustic monitoring from all around the U.S.

The map was originally created to determine which areas of the country have sound levels which could interfere with the survival of species with sensitive hearing. It’s also interesting and helpful to determine which places are the most hearing-healthy—if you want to protect your hearing, stay away from the yellow areas!

Researchers found that the quietest areas of the country (where noise is measured at less than 20 decibels, about as soft as a whisper) are in the west, especially in states known for their wide open spaces, like Colorado, Wyoming, and Nevada. Researchers tracked sound levels across the country and measured noises like air and street traffic. Some of the quietest places in the U.S. are as silent as they were before Europeans arrived on the continent, according to researchers. If you want to experience pre-colonization levels of quiet, places like Yellowstone National Park in Wyoming and the Grand Sand Dunes National Park of Colorado are two of the most quiet areas to visit.

Unsurprisingly, researchers found that cities produce the most noise—an average of 50 to 60 decibels. The East coast is the loudest, most likely because the majority of large cities are along the Atlantic. If you’re hard of hearing, you’ll definitely need to wear your hearing aids in any of these cities. According to a list compiled by Men’s Health, the loudest city in the country is Houston, Texas. Interestingly, New York City—the country’s most populated metropolis—doesn’t even fall in the top ten loudest cities. Orlando, Florida and San Francisco, California round out the top three loudest, while Durham, North Carolina was ranked as the quietest. 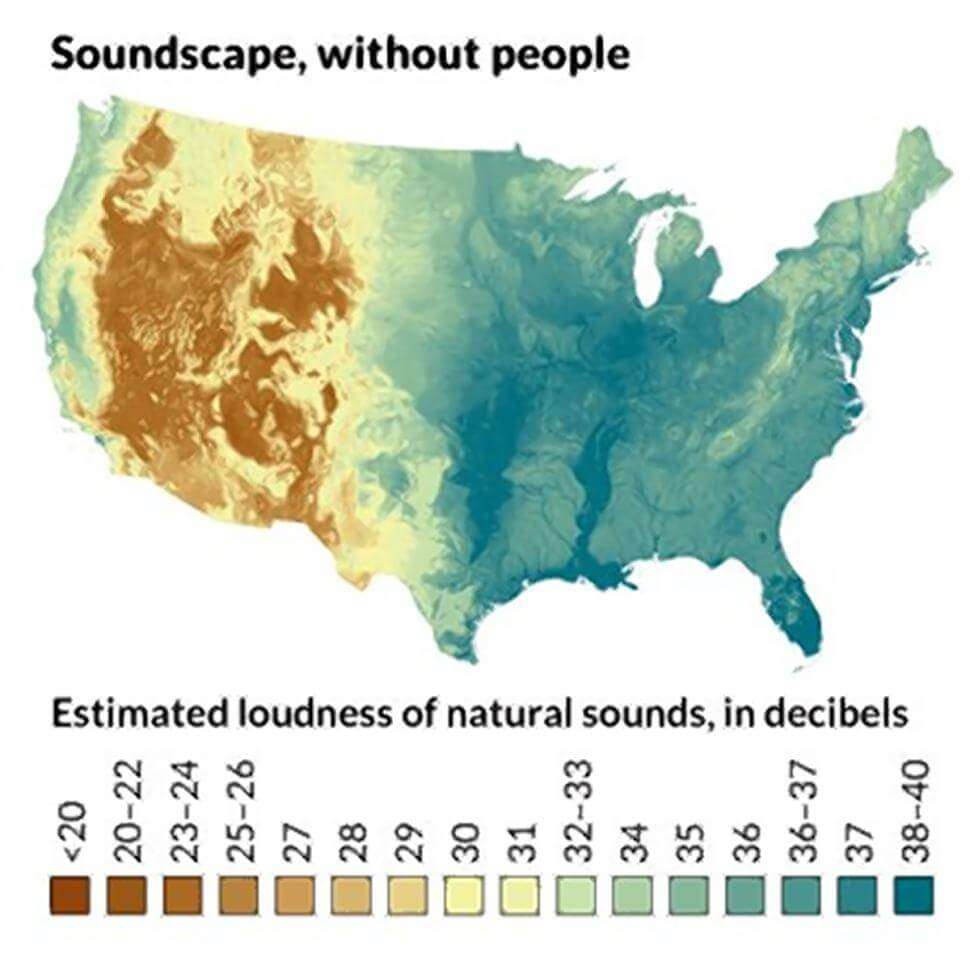 The graph above shows the same test done without the presence of humans. Interestingly, the east coast is still far louder than the west coast.

The research was conducted in order to examine places where manmade noise could be affecting wildlife. Animals such as owls and bats have much more sensitive hearing and depend greatly on sound to locate prey. Some animals also depend on hearing mating calls in order to find a mate and reproduce, and human noises (such as cars, planes, or factories) can interfere with the mating process. The Natural Sounds and Night Skies Division of the National Park Service wanted to identify where noise pollution could be an added source of stress to an ecosystem. Researchers used sound meter gauges in over 500 park sites to measure sound, and then used computer modeling to apply their findings to the entire country. Going forward, soundscape managers can use this data to enforce sound-limiting regulations in national parks across the country. It’s important to remember that excessive noise can not only damage your hearing, but could be affecting the ecosystems around you. Do your best to reduce excessive noise, and avoid it whenever possible!