Can Smoking Cause Hearing Loss?

Wait before you take the next puff from that cigarette – it might affect your hearing!

While the list of negative health effects of smoking is long and ugly, we’d like to highlight how smoking can ultimately be the harbinger of hearing loss.

The Surprising Link Between Smoking and Hearing Loss

One in five Americans or roughly 20% of the US population, are smokers.

Smoking causes toxic chemicals to be ingested, such as formaldehyde, arsenic, vinyl chloride, ammonia, and hydrogen cyanide. Some of these substances, including nicotine, are considered “ototoxic”, meaning that they can impair your hearing, cause tinnitus or affect your balance.

Passive Smoking and the Risk of Damage to Your Ears

You might be thinking that you’re off the hook if you’re a casual smoker. Unfortunately, that’s not the case. While your risk is increased with more smoking, passive smokers still have a greater risk for hearing loss when compared to non-smokers.

Various statistics in recent years showed that smokers are 70% more likely to develop some form of hearing loss than non-smokers if all other factors are corrected. Smoking combined with noise exposure is an even more explosive combination.

A study among manufacturing workers exposed to steady noise environments revealed that smokers had a 4x higher incidence of hearing loss than their non-smoking coworkers in the same noisy line of work. Not surprisingly, the prevalence of hearing loss among smokers is directly related to the number of smoking years.

To get a better understanding of the mechanics involved, let’s have a look at the ear picture below: 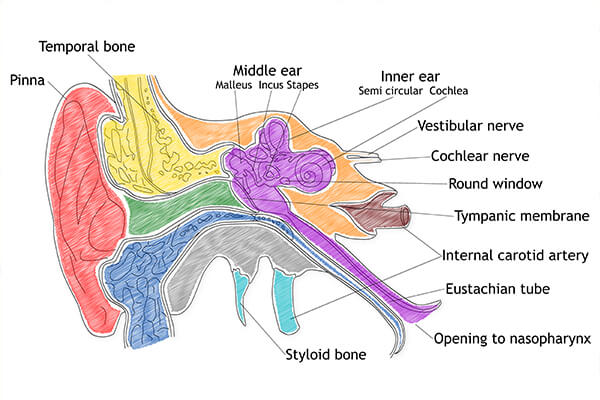 The Science Behind How Smoking Affects Your Ears

Nicotine and its Effect on Your Ear Health

First, the nicotine and carbon monoxide that result from smoking tightens your blood vessels, including the ones in your ears. This restricts the blood flow and thus the life-giving oxygen in the inner ear. The tiny hair cells in the cochlea that are responsible for translating sound vibrations into electrical impulses for the brain, can thus face damage due to this type of asphyxiation.

Neurotransmitters and How Your Brain Processes Sound

Secondly, nicotine can affect the chemical messengers (or neurotransmitters) in the auditory nerve and thus would not be able to accurately tell the brain what kind of sound is really being processed.

Permanent Hearing Damage as a result of Smoking

Thirdly, smoking unleashes free radicals in our bodies. If these radicals speed into the tissue and hair cells in our inner ear, permanent damage can result.

An important implication is the effect that smoking has on those around us. Studies have shown clear correlations between hearing loss and second-hand smoke.

This is particularly troubling when it concerns children since the auditory system is usually not fully developed until late adolescence. Children who are exposed to second-hand smoke are at an increased risk of developing ear infections.

Second-hand smoke can also harm children long-term by damaging their hearing health. While second-hand smoke may not be quite as harmful as active smoking, it’s still smoke- and as such, can cause serious harm to those exposed.

So spare yourself the hearing trouble, tone down on those cigarettes, and maybe try yoga for relaxation instead. In the meantime, you can learn more about how our wonderful ears work in Audicus Hearing Aids’ guide to hearing.

by Patrick Freuler, Updated in 2022 by Kim Smith